The invention of the electric kettle has been one of the biggest boons for mankind. Especially in a tea and coffee loving nation such as ours, where on an average, people consume 2-3 cups or mugs of their favourite brew each day. It is primarily because of this reason that kettles have become an integral part of our life. Kettles provide a fast, convenient, and easy option of preparing the boiling water needed for making our daily beverage. In many ways, they score over the traditional way of boiling water over a gas burner.

Better than heating water on the gas burner

Water in a kettle boils much faster than on a gas stove. A kettle is incredibly convenient to use, and can be run almost at any place that has an electric connection. From a kitchen to a study room, the office pantry or even at a workstation. It is portable and can be carried along even when travelling. Unlike boiling over a gas burner, with an electric kettle, you need not keep a watchful eye over it until the water is boiled. If the kettle is used correctly, water does not overflow out of it, and the kettle automatically shuts off when the operation is completed, freeing you from the task of supervising it. Its dry boil protection feature automatically shuts off the operation when the kettle is accidently run without filling water. Besides these, several other features make sense to buy a Morphy Richards kettle.

Choose a model that comes with a detachable base containing the power cord that allows 360o movement. So after the boiling operation, it can be detached from it base, leaving its power cord behind. This makes it easily portable and convenient to carry without lugging along the power cord.

Boiling water prepared in the kettle can be used for various other purposes such as for pouring into a pan for making instant soup, noodles, or pastas, or for adding boiling water to any recipe that requires it. Besides, the water that is boiled and cooled in the kettle also comes in handy for preparing feeds for an infant in the house. A special model of Morphy Richards called the Noodle / Pasta & Beverage Maker – InstaCook Electric kettle does what its name suggests, and a lot more – it cooks noodles and pasta, brews tea or coffee, cooks soups, and also cooks sweet corn.

A name synonymous with trust

Morphy Richards carries with it 80 years of unwavering trust reposed by millions of delighted customers across the world. Enjoy uninterrupted performance with thoughtful and safety features that are unrivalled in its category. 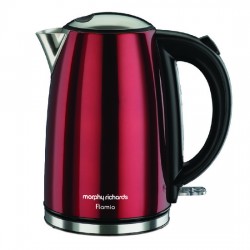 -35 %
Brand: Morphy Richards Model: Flamio
Morphy Richards Flamio 1.7 L Electric Kettle, Red
Make hot soup instantly with the Morphy Richards Flamio 1.7L 2000W Electric Kettle to boil water or prepare premium tea quickly and efficiently. The ergonomically designed handles ensures a proper grip and comes with a unique design to complement your modern kitchen. No need to look for markings to place the kettle correctly, it can be placed in any direction. It's subtle design is sure to catch the eye, while the simplicity and functionality are sure to make every day a little easier...
₹2,648 ₹4,075
Ex Tax:₹2,648
Add to Cart
Buy Now 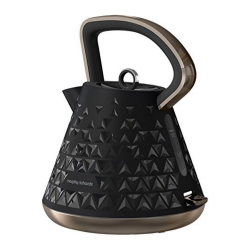 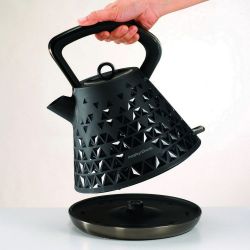 -42 %
Brand: Morphy Richards Model: Prism
Morphy Richards Prism 1.5-L 3000W Kettle, Black
Add convenience to your daily morning routine with the easy-to-use and efficient Morphy Richards Prism 1.5 L Kettle. This Prism kettle represents the cutting edge of kitchen design.  This Kettle has the standard Water window water level. The on and off switch for this Kettle is conveniently located at the Bottom. This Kettle has a 360 degrees cordless cord type which means it can be lifted from the base for easy pouring (recommended). This Kettle has a Pull off lid type (recommended). We have determined that this Kettle is best for Families, has a Kettle shape, and a Standard spout...
₹6,998 ₹11,995
Ex Tax:₹6,998
Add to Cart
Buy Now 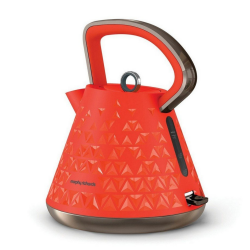 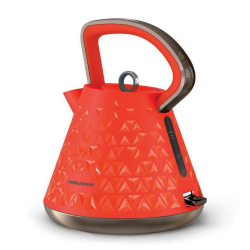 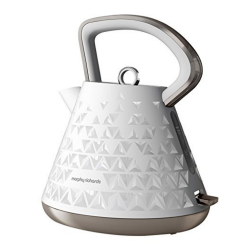 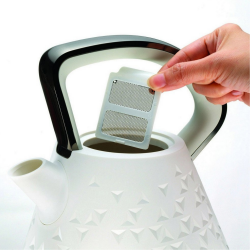 -43 %
Brand: Morphy Richards Model: Prism
Morphy Richards Prism 1.5-L 3000W Kettle, White
Add convenience to your daily morning routine with the easy-to-use and efficient Morphy Richards Prism 1.5 L Kettle. This Prism kettle represents the cutting edge of kitchen design. With its dual texture finish and prism pattern, it will be the stand out appliance in any kitchen. Morever It comes with the limescale filter ensures your cup of tea tastes as good as it looks...
₹6,893 ₹11,995
Ex Tax:₹6,893
Add to Cart
Buy Now
Showing 1 to 4 of 4 (1 Pages)